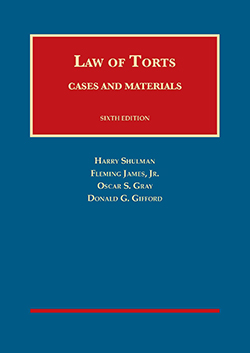 Cases and Materials on the Law of Torts

For more than seventy years, leading torts scholars at the Yale Law School and elsewhere have used this casebook. It unconventionally begins with strict liability. A recent study published by the Arizona State Law Journal shows that this sequence results in students experiencing a greater appreciation of “the judge’s role as being influenced by social, economic, and ideological factors and a sense of fairness and less as a process of rule application than do students who begin their study with either intentional torts or negligence.” The Sixth Edition is more accessible to students because of substantially expanded textual explanations and more tightly edited opinions. Updates include frequent discussions of Restatement (Third) provisions and a significant number of recently decided cases including several from the Supreme Court addressing products preemption, displacement in climate change litigation, and First Amendment limits on liability for intentional infliction of emotional distress.

CASEBOOKPLUS. YOUR PARTNER IN LEARNING & ASSESSMENT

This title is available in our CasebookPlus format. Anchored by faculty-authored self-assessments keyed to our most popular casebooks, CasebookPlus allows students to test their understanding of core concepts as they are learning them in class.

DEVELOPED WITH EVERY TEACHING STYLE IN MIND

Adopt the CasebookPlus option of your chosen text and provide your students with all the tools they need to gauge their understanding of the material—on their own, outside of the classroom, with no extra work on your part.

For faculty who wish to view their students’ quiz progress and results, we’ve added new optional customizable reporting capability that can help you evaluate your students’ understanding of the material. This feedback can also help your school demonstrate compliance with the new ABA Assessment and Learning Outcomes standards. Learn more about the reporting available to you from your Account Manager or view the course set-up instructions to get started.

OPTIONS FOR YOU AND YOUR STUDENTS

Students purchasing a used book, or those who are renting their text, can still utilize all CasebookPlus digital resources by buying the digital only option.

The chapter includes a variety of new textual notes, including the following:

Chapter 3. The Anatomy of Fault.

Chapter 4. Causation and its Cousins.

Chapter 5. The Effect of Plaintiff’s Conduct and Related Issues.

As previously noted, portions of the “old” Chapter 6 on Damages now appear in a separate chapter, Chapter 8: “Other Limitations on Liability Based on Type of Harm,” which will be described below.

Chapter 7. Protection of Others.

Chapter 8. Other Limitations on Liability Based on Type of Harm.

This new chapter incorporates material formerly in Chapter 6, Damages, as well as additional material. As the introduction to the chapter explains, “This chapter considers those instances in which the type of damages sought by the plaintiff brings with it more restrictive rules governing liability.” Part A considers rules and policies governing recovery for psychic harm alone. Part B covers whether there should be recovery for loss of companionship as a result of a non-fatal injury to a family member. In Part C, we turn to another type of harm often handled under the rubric of “no duty”—recovery for a child’s “wrongful life” or a parent’s “wrongful birth” resulting from medical negligence. Finally, Part D covers the law governing whether there can be recovery for purely economic or commercial loss in the absence of personal injury or property damage.

Chapter 13 (formerly Chapter 12).  Alternative Compensation Systems and Their Coordination with the Tort System.

Chapter 13 has been substantially restructured since the last edition, and significant new material is substituted for older material that has been deleted or shortened.

A new case, Tata Consultancy Services v. Systems Int’l, Inc., explores some of the major issues in the law of interference with contract. It replaces Kenty v. Transamerica Premium Ins. Co. Tata arises in a familiar context for business torts—the defendant’s luring away of valued employees of a competitor.

A newly added opinion, Comedy III Productions, Inc. v. Gary Saderup, Inc., explores the boundaries of the “transformative” test for determining when the First Amendment protects an artist’s reproduction of an earlier work.

Learn more about this series.